Can we harness the power of the ocean to save it? Island Cruising Family
17875
post-template-default,single,single-post,postid-17875,single-format-standard,theme-icf,bridge-core-2.6.3,woocommerce-no-js,qode-page-transition-enabled,ajax_fade,page_not_loaded,,side_area_uncovered_from_content,columns-4,qode-theme-ver-28.7,qode-theme-bridge,wpb-js-composer js-comp-ver-6.5.0,vc_responsive 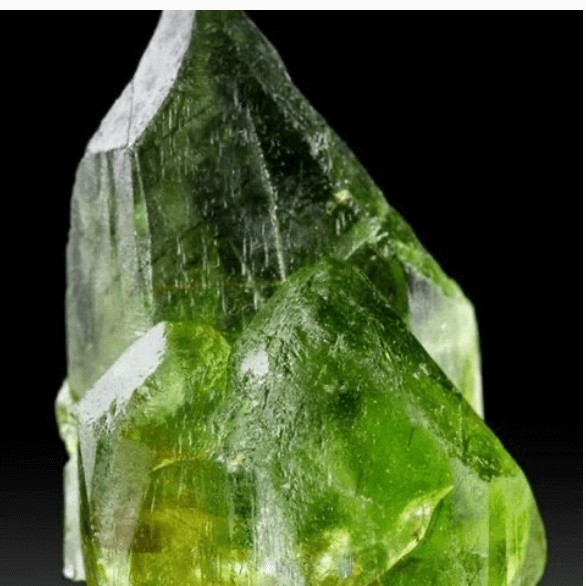 15 Jul Can we harness the power of the ocean to save it?

This year, a Draft UN climate report warned us of drastic climate changes coming over the next 30 years. End of June 2021, France 24 even titled ‘The worst is yet to come’. At this news, I heard some friends declaring ‘They are alarmists for years…’. Others, resigned, agreed on the line that ‘Only politics have the power to make things change at the path which would be needed to reduce CO2 emissions…’

Yes maybe… But what if there was an existing solution in our reach? Something in power, already existing at a natural state which could change the game and help us controlling Co2 emissions? 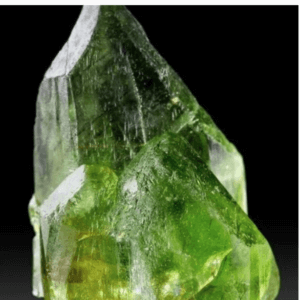 Project Vesta international scientific team studies olivine (see picture beside) and coastal carbon capture (CCC). They chose to fight ocean acidification and carbonisation of the planet based on concepts which were already known for decades.

This research-based organization exists since 2019. Its mission is to advance the science of Coastal Carbon Capture using a rock called Olivine, a rock which is present all over the globe. At this day, Project Vesta study the possible deployment of this green solution all over the world.

But you will ask rightfully, what is Coastal Carbon Capture?‍ 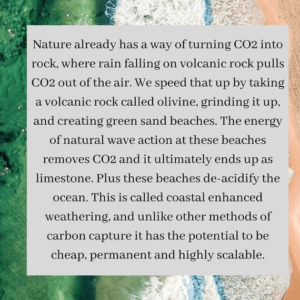 The goal is simple: remove and store CO2 on long timescales (10’000 years to hundreds of thousands of years).

The process aims to accelerate the dissolution of olivine into water by spreading large amounts of pulverized olivine-containing rock into coastlines. There it can dissolve in seawater, thereby increasing the rate of CO2 absorption by the ocean.

When olivine dissolves in water, it drives the below reaction to to the right, thus increasing CO2 uptake, increasing pH, and generating alkalinity. As a result, this process has the potential co-benefit of counteracting ocean acidification.

What is Ocean acidification?

Ocean acidification is the process by which increasing atmospheric CO2 dissolves in seawater, which produces more hydrogen ions, reduces pH, and increases acidity. 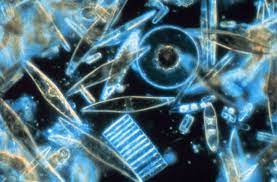 Ocean acidification reduces the ability of calcifying organisms like corals to grow and produce exoskeletons, or shells. Everyone has seen bleaching corals by now but nowadays we can also observe young crabs with malformation of their shells due to the negative variation of the ocean pH value.

Dissolving olivine in water traps hydrogen ions into dissolved silicate (H4SiO4), a molecule that can be used by diatoms, an important microalgae found in the ocean which fixes carbon dioxide and forms the base of the food web.

What is the basic concept of Project Vesta? 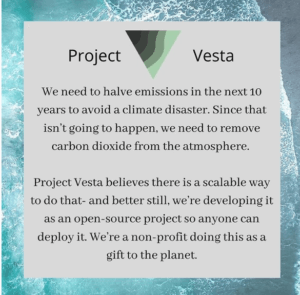 Well, it is simple: a volume of 7 KM3 of olivine rock on only 2% of the world’s tropical beaches could remove total yearly CO₂ emissions created by human activity.

Yes, you read well, we have a solution to absorb all the CO2 causing pollution and ocean acidification.

This means that with an action taken on different spots on the planet and the action of the waves, we could definitely solve the issue of our emissions. The research timeline is long but we could act collectively to impose such solution as a non-negotiable counterpart to our industrial activity.

At this point, I just realize how much it is important to share the existing game-changing organizations who are working independently to preserve our planet. The scope of solutions may be broader than we imagined.

Spreading the word on this solution to climate change is capital to help the implementation of this project on different beaches all around the earth. The next 10 years are critical for all of us.

Thank you to the Project Vesta team for their dedication and commitment to save our oceans and our planet. Specially proud of our cousin, Cheyenne Moreau, leading the project in the Caribbean from Cabarete! 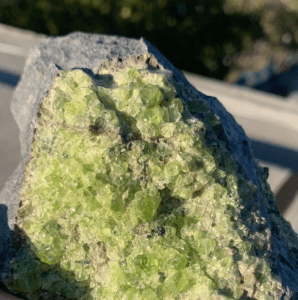